What I Did When My Host Told Me He Liked Me 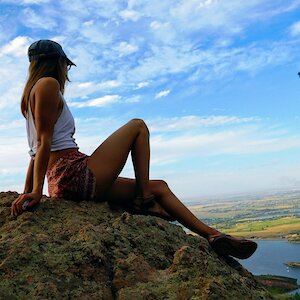 My Workaway host telling me he liked me is one of the themes I wanted to explore further through writing. If you think maybe I overreacted to a simple sentence, that’s understandable, because I have wondered that myself many times. So here is the story in greater detail, with a little more nuance and commentary.


When I first reached out to this host, I thought his wife/partner was going to be there as well. A few days later, he told me that she would still be in California--where they were moving to--at the time that I came up, and he wanted to let me know ahead of time. I definitely would have felt better if she were there, but I was still itching to start my journey, and no other Workaway opportunities seemed to be available at the time. So I asked to Skype with them both, to make sure they didn’t have crazy eyes.


When I got there, I cannot emphasize enough the amount of platonic vibes that I tried to give off. I asked everyday about his partner—when she would be there, her backstory, what she liked to do, etc. I wanted to keep her in the background of the conversation. I wanted to reassure myself that there was another female out there who he was attached to, and who trusted him. And I wore gross work clothes and no makeup at all times.


Right before I left, I was just starting to feel truly comfortable around my host, and to feel like we had established a good dynamic and even friendship. We had been going on hikes in the afternoon, making dinners in the evenings, and occasionally doing some computer work in the same room.


At our very last dinner, he told me he and his partner were in a rough spot. I didn't ask for many details. When he told me he liked me, on the Manitou Incline, everything that I had been wary about in the back of my head jumped right back out at me. And what was I supposed to do about that on a somewhat secluded and very steep hike? The next hour and a half was so incredibly awkward. I said thanks, and tried to act normal, when my insides were screaming.


I didn’t ask what “kind” of like he meant, because I knew. And I didn’t care what he might have to say about it, because I knew how it made me feel. So I either marched past him on the incline or let him get ahead of me while I “caught my breath” and “took pictures,” and on occasion, tried to say normal things. I was surprised how normal my voice was able to sound.


Before we made it to the top, he apologized and said he realized that what he had said was inappropriate, and that he’d put me up in a hotel for the night if I didn’t want to stay. “Thanks for that offer,” I said. “I appreciate it, and I’ll think about it.” But I didn’t, because I didn’t want him to know which hotel I might be staying at.


Instead, when I got to the top, I told him that I was just going to stay with a friend of mine instead. (I had just remembered that she and her family were in the area, and I Snapchatted her while catching my breath.) I vibed up there for a little while, away from him, because I still wanted to appreciate the 1.5 hours and 2700 steps that I’d just completed, goddamn it! Then I went over to where he was and he gave me the house keys and told me I could go ahead while he took the longer way down. I said thank you for everything, still 1000% polite, and headed down, clutching the keys.


I wasn’t tired, and going down was way easier than going up. Plus, I had some extra adrenaline helping me along. At least I could go down alone, and pack up by myself, in peace. That had been thoughtful of him to suggest.


And then I looked back up behind me, and I swear I thought I saw him jogging down. So I picked up my pace, which was already quite fast for such uneven stairs. But no, it was him, and he began to catch up with me, and let me tell you, it was quite disconcerting to look behind me and see the gap between us close in as if I was being chased, even though I was mostly sure in my rational mind that I wasn’t. When he caught up, he said he’d decided not to take the slow way down, and that he’d take the keys back since he was faster.


“Okkkk,” I said, now just so ready to be gone. It made me so much more uncomfortable to know that when I got back down to the house to pack up my stuff, he would be there. And it was getting dark. So I told my boyfriend what was going on, and he called me almost right away, and I shared my location with him on Google Maps, all of which made me feel a little better.


So I got back to the house and went straight upstairs to my loft room, and did the quickest packing up I ever have in my life. It only took me three trips to the car, and I ignored my host as much as I could. On my last trip, he asked if I had more stuff, and I lied and said yes, that I’d be coming back up to the house in a second. I didn’t want to say a second goodbye, or be around him a second more than I had to now that it was dark. I had already said everything I was interested in saying in person and alone. So I got in my car and locked the doors and just drove away and didn’t look back. I know my adrenaline was probably making me more scared than I needed to be, but I didn’t really care.


Later that night, after I was safely at my friend’s house, I texted him, saying that I hoped he understood why what he said was a big deal to me, and would be to any woman staying at his house. I told him I know that making me feel uncomfortable wasn’t his intention, but the kind of blindness to how inappropriate that was is unacceptable.


He sent me four messages, and nowhere in any of them was an apology. Instead, he said that he felt ashamed and worthless that he made someone feel the way I did after saying “I like you.” He said he couldn’t describe how despicable I made him feel. I had mentioned the difference in power dynamics, how I was staying in his house and that he was literally two times bigger than me, and he said--get this--that he couldn’t help that he was bigger.


I told him, “It’s not just what you said, it was the situation. I’m not asking you to change your size,” (obviously, and why was that something I even had to explain?), “just to be aware of how your identity might play into interactions. So, don’t feel despicable, just go take a women’s studies class.”


I stand by everything I said, and I only wish I had the guts to say it in person. So many great women are out here doing the work to understand things like power dynamics to literally keep ourselves safe, and some of the grown men we interact with try to meet us on a plane of knowledge where we were ten years ago. I’m not going to meet anyone at that level anymore. So I blocked his number.


And that was that, but moving forward, I am definitely going to search out Workaways either run by women or with at least one other woman there. Like I said in Episode 3, I’m still stubbornly going to want to take all the opportunities available to me, but if I know certain opportunities might make me feel uncomfortable (and not in a growth oriented, getting out of your comfort zone way) then I might as well just skip right along to the next one. Cheers to living and learning!