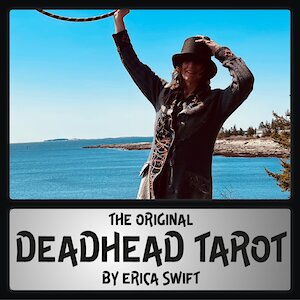 What is this all about, anyways?

I don't know if we know the answer exactly.  Some say that the images of the Tarot were created after the destruction of the Great Library in Alexandria - that the documentation of spiritual knowledge lost in the fire was transferred into spiritual motifs and images that the elite could decipher - and thus the Major Arcana of the Tarot was born.

Some say these images were then carried into Europe and beyond by the Gypsies - eventually the Minor Arcana transforming into the playing cards we see today with the un-numbered Joker (The Fool) and the suits of Clubs (Wands), Hearts (Cups), Spades (Swords), and Diamonds (Pentacles).

In the Tarot we see themes relating to the study of Mythology, Kaballah (definitely not my strong suit), and the Zodiac (a topic I am slightly more comfortable with).  In its simplicity, it is a representation of the Hero's Journey that has been addressed by mythologists and authors such as Joseph Campbell.

Is reading Tarot Witchcraft?  Well, some of us are more intuitive than others but that doesn't mean this is Witchcraft.  I like to think of this craft as intuitive storytelling.  It becomes easier when you begin to understand the symbolism seen on the cards.  The reading of the cards becomes profound because the symbolism is meant to represent themes that reside in the collective unconscious of humanity - all of that lost knowledge burned in the Great Library.  The discussion of the themes of the collective unconscious then become discussions that are "psychological" - as in, the study of the human mind and psyche - and therefore universal in nature.

Whether it's Witchcraft or not, the aim must always be to DO NO HARM - and my goal here is to be able to discuss the topics and symbols that appear in the cards in a manner that is thoughtful, somewhat educational, and is for the betterment of grateful souls - my collective community.

Thanks for reading my blog!!!